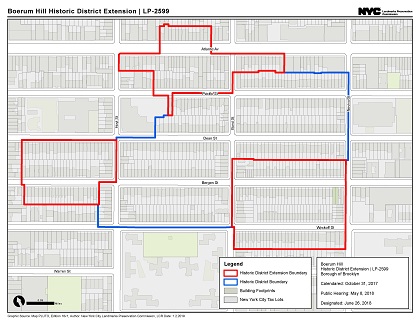 This historic district represents the diverse cultural and economic history of Boerum Hill, as well as its largely intact 19th century architecture.

“I am delighted the Commission designated the Boerum Hill Historic District Extension,” said Landmarks Preservation Commission Executive Director Sarah Carroll. “These streetscapes are characterized by wonderful rows of intact mid-19th century buildings that are cohesive and consistent in style, materials and typology, and complement the historic character of the Boerum Hill Historic District.”

The blocks included in this Extension share a similar development history to the Boerum Hill Historic District. Developed in the mid to late 19th century, the Historic District Extension was built for a diverse community of laborers, business owners and commuters considering its proximity to the South Brooklyn waterfront and the Gowanus Canal, and the importance of Atlantic Avenue. Its architecture is representative of this period of development. The single-family row houses and row house-scale residential buildings with historic storefronts dating from the 1850s to the 1870s were mostly designed in the Greek Revival and Italianate styles. More eclectic styles appeared in the 1880s, including a row of Second Empire-style houses on Bergen Street, and neo-Greco-style apartment buildings scattered throughout the District Extension. These largely intact streetscapes contribute to the neighborhood’s character and sense of place.

The Boerum Hill Historic District represents a rare and historically significant expression of urban middle-class housing of the mid-19th century. The neighborhood, which originally offered economical housing to local merchants and businessmen, is comprised of approximately 250 row houses and several small-scale commercial structures built between 1845 and 1890. The district is characterized by its modest scale, visual coherence and architectural integrity.

Most of the row houses were designed in a modified Greek Revival or Italianate style although excellent examples of the Gothic Revival, French Second Empire, Greek Revival and Queen Anne styles also occur within the area and contribute to the district’s qualities. The residences within the district are constructed almost entirely of brick and feature a 3-bay, 3-story configuration with projecting stoops, below grade areaways and straight, projecting cornices. Although several the buildings within the district have suffered minor alterations or the loss of detailing, all but a handful retain their original architectural integrity in large measure.

The residential blocks in the Extension are notable for their largely intact architectural character and their similarities to the existing Boerum Hill Historic District, while the additional section along Atlantic Avenue enriches our understanding of the neighborhood’s commercial and social history. The commercial storefronts and single-family row houses dating from the 1850s to the 1870s were mostly designed in the Greek Revival and Italianate styles; more eclectic styles appeared in the 1880s as the last remaining empty lots were filled, including a row of Second-Empire style houses on Bergen Street, and neo-Greco-style apartment buildings scattered throughout the Historic District Extension.

This mix of styles and the handsome decorative details applied to relatively modest structures reveal the aspirations of residents and developers, many of whom had arrived as immigrants pursuing the American dream. With its proximity to the South Brooklyn waterfront, the Gowanus Canal, and Atlantic Avenue, the Boerum Hill Historic District Extension tells the story of how the combined forces of industry and commerce drove the urban development of Brooklyn in the 19th century. Its architecture is representative of this period of residential design, and its intact streetscapes retain a distinct and cohesive historic character.

This link will take you to an interactive map of City Historic Districts.

” I commend the Landmarks Preservation Commission for their work on the extension of the Boerum Hill Historic District,” said Council Member Stephen Levin. “The addition of all three areas of the historic district will allow for the preservation of the aesthetic, character, and charm of historic Boerum Hill."

“The Boerum Hill Historic District Extension is a treasured local gem and affording it this designation will preserve its storied architecture for generations to come,” said Congress Member Nydia M. Velázquez. “I applaud the Landmarks Preservation Commission for taking this step and will continue working to ensure the preservation of this historic area.”

“I am thrilled to hear that Boerum Hill's historic district has been expanded. I have lived in Boerum Hill for 35 years, I served as the Boerum Hill Association President in the 1990’s, and now I’m proud to represent the neighborhood in the Assembly,” said Assembly Member Jo Anne Simon. “Over the years I have seen Boerum Hill change and grow, and I am glad that the historic and beautiful buildings that make up this diverse community's sense of space will be protected and preserved.”

“The Boerum Hill Association is pleased the Landmarks Preservation Commission recognizes the significance of these additional blocks and the importance of preserving them,” said Howard Kolins, president of the Boerum Hill Association. “By adding more residential streets to our current district and also a portion of Atlantic Avenue, a very special commercial zone, we will further protect our neighborhood’s historic character.” 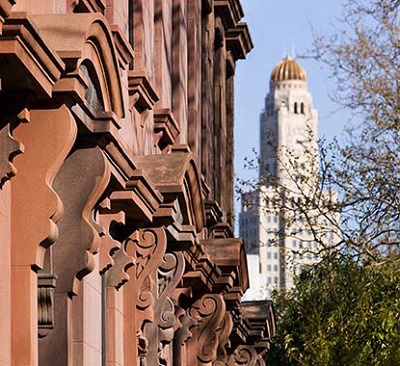